How the Wall of Respect Became a Reality 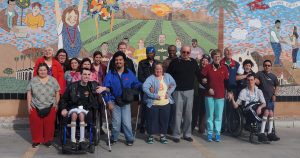 In 2007, The Arc of Riverside County board member William Edwards, a criminal defense attorney, was appointed to the President’s Committee for Persons with Intellectual Disabilities. This prestigious committee has been helping to set policy for Federal agencies and advising President on intellectual disability issues since the Kennedy administration. In the 2008 annual report to the President, they said this about why the progress toward inclusion is not happening fast enough:

“All people, including those with intellectual disabilities, are endowed by their Creator with the same inherent value…but no amount of legislation that solely addresses government policy will ever be sufficient to create a truly inclusive society as long as the hearts and minds of the citizens of this country continue to harbor misinformed ideas and attitudes about people with intellectual disabilities.”

Inspired by this report, soon after is was published, our local chapter of The Arc launched an initiative to do our part to hasten the progress. “The Value of One” is our affirmation that all people, with and without disabilities, have inherent value. This campaign has many initiatives including an effort to join forces with other organizations to end the “R” word and replace it with another “R” word: Respect.

Another initiative proposed was to use a wall on our property to make a visual statement to illustrate our above beliefs. Thus the concept of The Wall of Respect was born. Two years ago, we began looking for the right artist to create a large mural to make this visual statement that could be seen by those visiting our location and anyone else interested in our campaign. We were fortunate to find accomplished mosaic artists: Erin Maxell and her parents.

This Wall of Respect is an important part of the City of Riverside and contribute to its growing reputation as a city of arts and innovation.